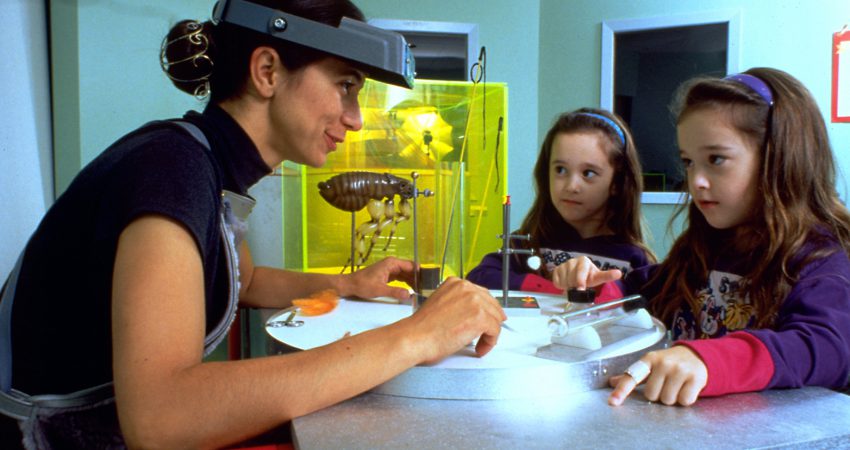 How conversations between youth and scientists during internships shape learning trajectories By Déana Scipio - May 2011
Keywords: Discourse, Questioning Strategies
Theme(s): Teaching and Learning in Informal Settings

This study identifies the elements of natural pedagogical conversations during an internship in a science laboratory. It offers ISE practitioners insights into how scientists teach science in their labs, how youth interns initiate learning, and describes productive conversational forms that may impact their own work with youth.

This study is an ethnography of a 2-month long (10–16 hours total) university-based internship for high school youth. It focuses on one group of students who worked with a graduate student scientist (Nora) in her laboratory. The researchers did a close analysis of Nora’s normal teaching practice and broke it down into three steps:

1. Demonstration—Nora introduced the task and demonstrated techniques. She used the equipment to physically demonstrate techniques to the interns.

2. Practice phase—Interns did the work while she stood by, ready to jump in and help.

The study contrasted Nora’s interaction with the interns with the ways that students and teacher interactions are characterized within traditional classrooms by the I-R-E framework: Initiate (teacher), Respond (student), Evaluate (teacher). The researchers identified two conversational techniques between the scientist and interns that were different from what happens in a traditional classroom: Initiate-Clarify-Reply (I-C-R) and Initiate-Reply-Clarify-Reply (I-R-C-R). Both scientist and interns could initiate the conversation with a question, by describing a process in words, or by gesture. Clarifying could entail confirming, expressing a concern in words, or by a gesture. The reply would be a non-evaluative response. The major difference between this conversation style and the classroom framework was the lack of evaluation, which allowed the scientists and interns to focus on doing science in the laboratory.

The analysis of the conversational interactions is very technical. However, ISE practitioners can learn much from the snippets of actual conversations, descriptions of practice, and text-based analyses earlier on in the paper.