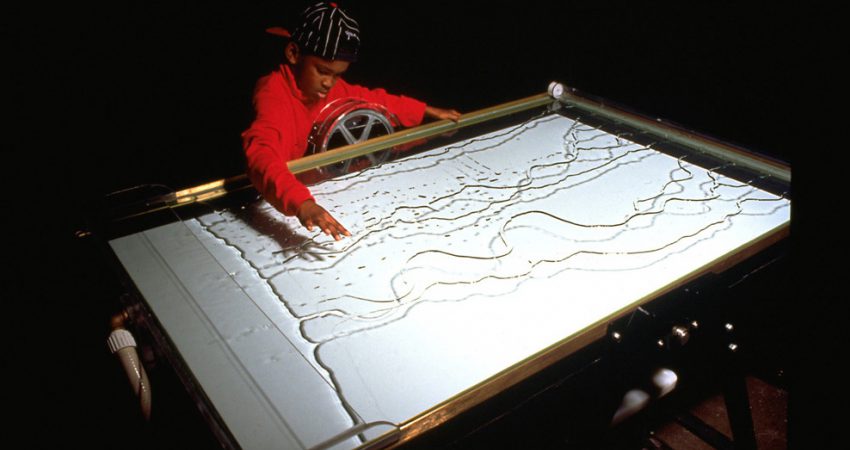 In this study, the authors consider the pros and cons of providing structures that focus inquiry at exhibits. Their research examined visitor behaviors with and without specific prompts at an exhibit. They found that the provision of additional materials and textual explanations limited visitor engagement at the exhibit to the express purpose defined by the added materials/text. Without the additional props, visitors were more exploratory and inventive in their uses of the exhibits; however, in these cases visitors often did not focus on a particular conceptual idea that the exhibit developers had been trying to communicate. The authors of this study examine these trade-offs by considering the “frames” that the museum visitors use and how they might be cued by physical artifacts.

The exhibit that was used in this study consisted of an infrared camera that projected images onto a screen so that users could notice temperature differences; for example cold noses and fingers showed up darker than warm heads, which showed up white. In one condition, mittens were provided and a label asked which type of mitten (e.g., wool, thinsulate, etc.) trapped heat better; in another condition, no additional objects were provided other than an explanation of how the heat camera worked.

Museum visitors using the exhibit were videotaped, researcher field notes were taken, and the research team viewed the video together. A coding scheme was developed around the conversations, and descriptions of differences in five categories of behaviors and interactions are described in the study’s findings. The authors argue that the frequency of these behaviors related to what visitors understood the purpose (or “framing”) of the exhibit experience to be – either as a lesson (e.g., to answer a specific question using the provided mittens) or as an open exploration (e.g., the condition without any prompts or props).

Visitor behaviors included: (1) creating data, (2) noticing data, (3) returning or repeat use of the exhibit, (4) expressing feelings (frustration, confusion, delight), and (5) constructing verbal explanations. More details for each of the categories are provided in the study, but several examples follow to give a sense of the trade-offs. The conversations of exhibit users who understood (“framed”) the exhibit to be a lesson, with label and mittens provided at the exhibit, tended to include talk about the insulating qualities of the mittens. In this sense, the props resulted in a desired focus on the specific concepts the museum staff wanted to promote. However, a drawback to this structured approach was that the study found that users tended to not create other types of data, such as noticing the differences in temperature in other body parts (warm noses or cold eyes) or objects in their surroundings (benches, wallets, or iPods).

By contrast, in the “creating data” behavioral category, visitors in the second treatment group, without the mittens and question prompt and who therefore approached (“framed”) the exhibit as a tool for exploration, often improvised ways to change the temperature of themselves and their surroundings to see the effect on the screen. Rubbing hands on pants to warm them, or using water to cool the hands were common behaviors. However, in this condition, the authors note that the cost of not providing directions came in terms of visitor explanation, since the total number of explanations related to insulation were higher when the label was provided.