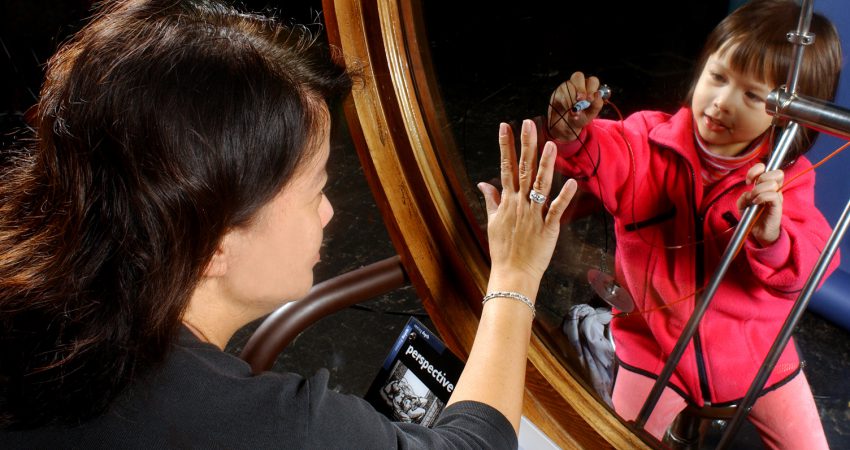 “Episodic feelings” include the emotions, thoughts, physical perceptions, and bodily movements that are remembered from the past in the present moment. They are embedded in the specific circumstances of both a past experience and a present moment of learning. This paper offers a series of descriptions that illustrate the ways in which one experience becomes a part of another for a 10-year-girl named Eleanor.

Eleanor participated in a series of five one-hour individual teaching interviews of elementary school students. The researcher used a style of analysis that carefully notes the moment-to-moment exchanges of talk and physical movements in a selected excerpt of video in order to deeply understand one person’s experience, without the researcher judging its correctness or diagnosing problems.

Eleanor was learning about representing motion on a line graph in a series of one-on-one lessons with a tutor/interviewer. The lessons used a motion detector to convert Eleanor’s arm movements into lines on a graph on a computer screen. For example, moving the arm closer to the detector lowered the line of the graph. First Eleanor used just one arm; then she advanced to using both arms and learning to draw two lines concurrently. The analysis focuses on this phase.

As Eleanor learned to control the slope of dual graph lines, she transitioned from testing her one-armed method to thinking through the application of that knowledge to the new style with two arms and two lines. For example, Eleanor remembered that holding one hand behind her made the single graph line rise higher, so she tried it again, but this time, she had to recognize the movement’s effect on the second line and adapt her movements in response.

As she learned to use the tool to make desired patterns with her movements, Eleanor expressed esthetic and emotional comments, such as “This is weird” or “Wow, that looks cool.” Remembering single-line graphs that she found pleasing, she tried to recreate them by recalling her movements and adapting them to generate two similar lines with two arms. Her growing understanding of the tool and what it means to represent movement in a mathematical format were not experiences isolated from other people: throughout her sessions with the tutor, Eleanor was also learning that representations have meaning only when they are interpreted in the way their creator intended. This learning invokes not only Eleanor’s past experience with only one motion detector, but also her interactions with her tutor, with the far-off makers of the detector device, and with the greater culture of which she is a part that communicates using Cartesian graphs.

Transfer of learning is the ability to extend what has been learned in one context to new contexts, perhaps from one problem to another, from one place to another (such as home to museum to school), or from one year in school to the next. Educators believe that this transfer represents understanding rather than merely memorization of a specific task. In this paper, Nemirovsky aims to broaden the concept of transfer beyond cognitive ability to include a collection of experiences—physical, emotional, and cognitive. He does so by incorporating phenomenology into his analysis, studying bodily movement in the belief that the body is intimately connected to the mind and to thinking, rather than conceiving the mind and body as separate entities.

Informal science educators often wish that we could anticipate and design to evoke these productive memories, but Nemirovsky thinks that deliberate evocation is impossible because episodic feelings are involuntary. They cannot necessarily be willed, predicted, or induced. Rather, they require exploration, extended play with tools and symbols, and, often, joint exploration with someone more knowledgeable. To maximize the potential for eliciting episodic feelings, educators might design programs, exhibits, or activities that tap the foundations of these episodic feelings: physical movement, interaction with others, and extended time for exploration and play.