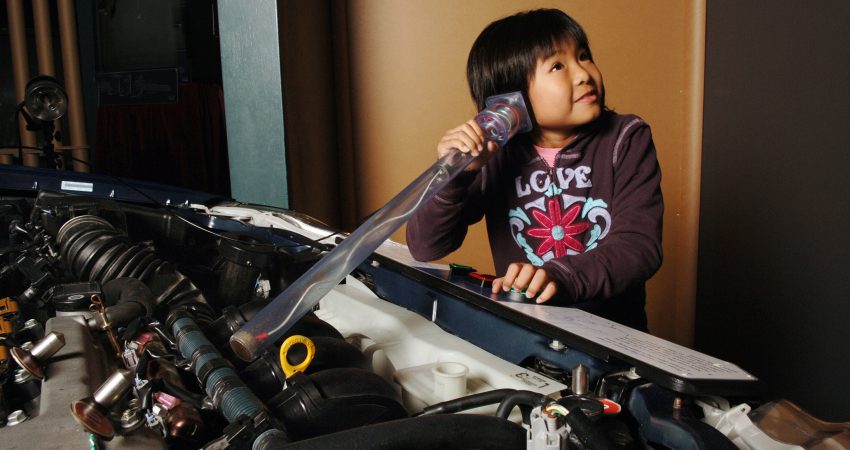 This study, conducted in a summer middle school mathematics class, was the researchers’ attempt to further explain the phenomenon of “distributed cognition,” the theory that learning and knowledge exist in social spaces (Hutchins, 1993; Hutchins, 1995; Lemke, 2000). The researchers investigated the ways in which middle school students successfully—and unsuccessfully—interacted with multiple types of representations in math. Students in the study used combinations of tables, computerized graphing software, and pencil-and-paper work to understand mathematical calculations.

In groups, students were tasked with determining which equation most closely fit an on-screen graph linked to an algebraic equation; for example, choosing y = 1/4x as the equation that matched the graph on the screen. Each student in the group consulted one of three types of mathematics tables along with the on-screen graph; each representation provided a separate piece of the “code.” The researchers’ analysis of the students’ talk shows that students ultimately “cracked the code” by collaborating to combine the different types of math representations. That is, they worked together to compare and analyze the graphs, software, and tables to figure out which equations fit the graphs.

The researchers also identified ways in which instructors can maximize shared problem solving. For example, one high-achieving student in the study tended to take too much control of one group, thereby inhibiting the learning of the others. Keeping a balance so all members of the group can learn, White and Pea conclude, lies in continuously “reorganizing and reconsidering roles” within a group.

This article provides firm evidence, for formal and informal educators alike, that shared learning can be powerful and meaningful, if carefully considered. When students are able to ask legitimate, authentic questions and share understanding about a common problem, their learning becomes truly “distributed by design.”

However, this approach is not without pitfalls: If tasks are too intensely problem-based, groups of students may forsake deeper understanding in order to achieve a “correct” answer.

Program evaluators should take this study as evidence in favor of using different types of assessment that score students’ dialogue and combined understanding, rather than whether individuals get a “right” answer. For example, this study used analysis of dialogue to evaluate student understanding.

This article’s theoretical framework is consistent with that of the learning sciences, as it is grounded strongly in the idea that learning does not exist in an individual, but rather in a shared social space (Hutchins, 1993; Hutchins 1995; Lemke, 2000). This theoretical position is similar to those held by Mitchel Resnick (1996) in his work on distributed constructionism with preschool children and by Ann Brown and Joe Campione (1994) in their work on communities of learners.

Such a sociocultural view of learning, in contrast with the belief that knowledge lies within an individual, emphasizes the contextualization of learning necessary for solving complex problems or investigating exhibits in informal STEM spaces. In this sociocultural framework, collaboration allows students to continually share and revise their learning.