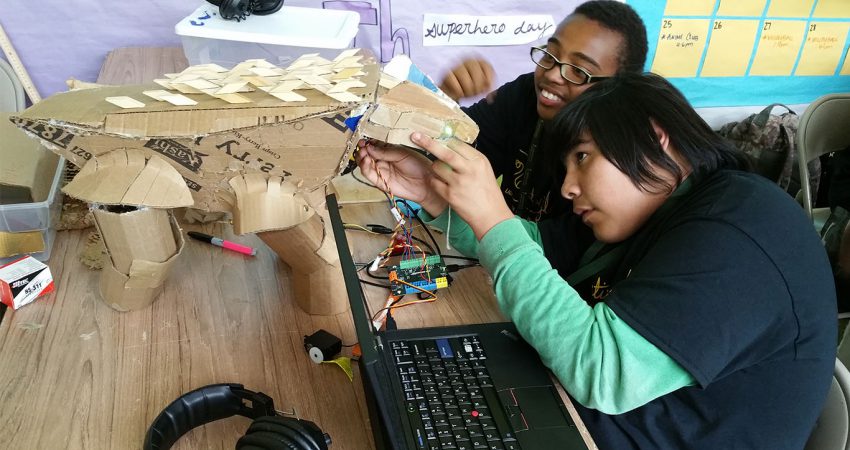 Engaging and retaining students from populations traditionally underrepresented in STEM has been a problem for decades. Research has shown that identifying with the scientific enterprise and with scientists is key for persistence in STEM fields. In this paper, Meyer and Crawford examine how an authentic science investigation in a culturally responsive environment influenced English language learners. The approach studied supported student learning and changed the ways in which students talked about science and scientists.

The research team conducted a case study of a fifth-grade teacher’s implementation of a curriculum called Fossil Finders. Classes participating in Fossil Finders receive samples from a rock outcrop. Students work in teams to investigate the samples using basic tools and then compare findings with teams in other locations.

The class in this case study included 14 girls and seven boys from Latino backgrounds. The research team selected five students to follow closely; this focal group included both boys and girls with a range of English language abilities. The instruction was videotaped; the study team also interviewed the focal students and used validated assessment tools to document impact.

The teacher, who was Latina, set up the classroom as a bilingual environment, interacting with students in both English and Spanish. She engaged the whole class in activities that shed light on the nature of science. For example, the class uncovered dinosaur tracks in an activity that showed the difference between observations and inferences. Highlighting the subjectivity of some processes helped students better understand the nature of science. The teacher extended this project into a literacy activity by having the students write about their observations and inferences as stories. Finally, the teacher also arranged for a scientist to come and answer students’ questions.

The researchers found that the students demonstrated increased content knowledge about geology as well as a more nuanced understanding of the nature of science. From seeing science as something learned out of a book, students came to understand some of the processes involved in actually doing science. The inquiry-based lesson and bilingual supports helped students realize that science is a way of understanding the world around them. Specifically, they understood that scientists make observations—they don’t have to always conduct experiments in a lab—and that scientists use their observations to make inferences and analyze findings.

Introducing an actual scientific investigation and giving students the authority to explore and describe their findings seemed to allow the students to match their views of science with actual scientific practices. They began to grasp that science is a human endeavor and developed a more nuanced understanding of how science is actually done. They discovered that scientists don’t always agree with each other and also that people in their families sometimes disagreed with scientists. The students’ interaction with a female scientist also expanded their knowledge of what scientists do and how people get to be scientists.

The findings suggest that embedding literacy supports and weaving discussions about the nature and practice of science into authentic scientific investigations in a classroom can help students better understand of the scientific enterprise. However, the researchers make some questionable inferences about the meaning of students’ interview responses. For example, one student, when asked whether all scientists do science the same way, responded, “… some scientists do experiments and some do fossils….” The authors suggest that this student understood that not all science is experimental, but it is not clear that the student gained this level of sophisticated understanding.

The curriculum used in this study is based on the idea of situated cognition (Brown, Collins, & Duguid, 1989) and constructivist-oriented thinking (Driver, Asoko, Leach, Mortimer, & Scott, 1994). These theoretical frames suggest that students learn through direct investigations introduced in ways that allow students to construct their understanding while pursuing purposeful activities. Using this approach situates the learning environment as a platform for bringing together home, school, and scientific cultures.

The study further supports the importance of culturally responsive teaching and learning but also highlights the importance of making the culture of science approachable. Afterschool programs are often sensitive to the cultural competencies that are required to work with students of varying backgrounds. But “culture” doesn’t have to mean only the students’ cultures. Students also need to experience the culture of science. Discussions of the “nature of science” are not very meaningful on their own but can be powerful when embedded in authentic science investigations that help students see their place in the world of science.