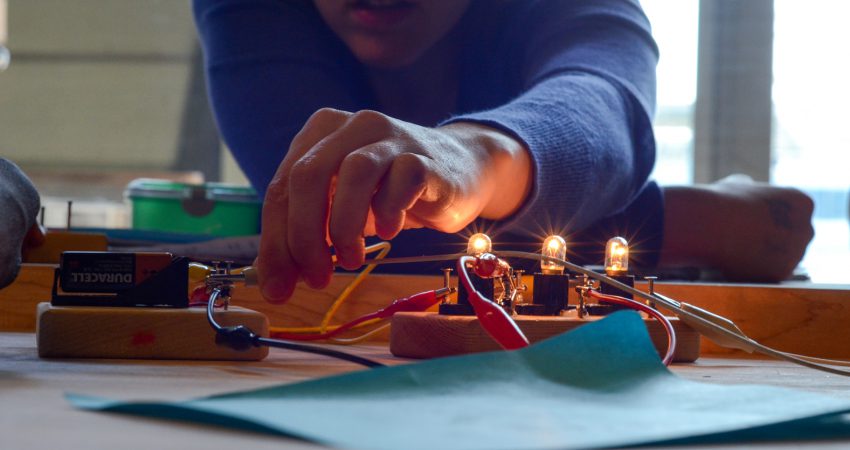 The ways people interact with tools and materials reflect cultural expectations about who should have expertise and what expertise looks like. For example, in the United States, sewing has been associated with crafting or fashion; it is usually seen as a feminine practice, whereas creating electronic circuits is considered a masculine practice. However, what happens with these cultural and gendered expectations in e-textile activities that combine sewing with circuitry? For example, is it “feminine” or “masculine” to use conductive thread to sew LEDs into a T-shirt?

The authors address this question by examining how Chicago public middle school students engaged with e-textiles in a two-week summer workshop. They asked:

Mediated discourse analysis (see Theoretical Basis below) was used to examine how self-selected mixed-gender pairs of children interacted with each other and with tools during an “e-puppetry” project. Each pair created two sock puppets, each containing half a circuit. When the two puppets touched, the completed circuit lit up LEDs.

First the authors analyzed gender patterns in the actions and interactions of two mixed-gender pairs. Then they looked closely at video of one student pair to examine in detail the students’ interactions and use of tools. They coded the students’ speech and actions to understand engagement with the activity, leadership roles, negotiation of control of tools, cooperation, requests for help, and other aspects—all in relation to gender.

The authors found that girls in the two focal pairs were involved with sewing and crafting 80 percent of the time, compared to their male partners’ 20 percent. (However, sewing in this activity involved circuitry, as the conductive thread could light an LED.) For the electronic task of measuring electric current and voltage, boys had their hands on the multimeter 75 percent of the time.

Girls were engaged in e-textile practices (including sewing, crafting, and circuitry) 74 percent of the time and had their hands on the projects more often than the boys. This proportion suggests that girls had more control over project decisions and materials. Still, boys were highly engaged in the activity: They were physically positioned toward the materials, often looking at the project, and talked nearly as much as their girl partners about project decisions and problems.

Close analysis of one pair of students showed that Amber took charge of the sewing materials, tools, and process, though Antoine was more experienced at sewing. The authors inferred that Amber thought Antoine was likely to hand the project off to an adult or peer. Antoine took charge of checking the circuit’s conductivity with the multimeter. The authors note that Amber was demonstrating leadership, not “bossiness.”

The authors’ work is informed by Bourdieu’s (1977) theory of social practice and Vygotsky’s (1978) cultural-historical theory, both of which emphasize that our world is shaped by social structures in dialogue with individual agency. Thus, learning is a social practice occurring in cultural contexts.

Many powerful STEM programs for girls have emerged over the years, in part because gender imbalances in STEM education can surface in mixed-gender groups. This study shows that girls can engage deeply with STEM practices when educators carefully consider gender patterns in the ways tools are used and accessed. Informal science educators and others can devise activities that equally value both feminine and masculine practices so that both girls and boys can engage in meaningful STEM learning.